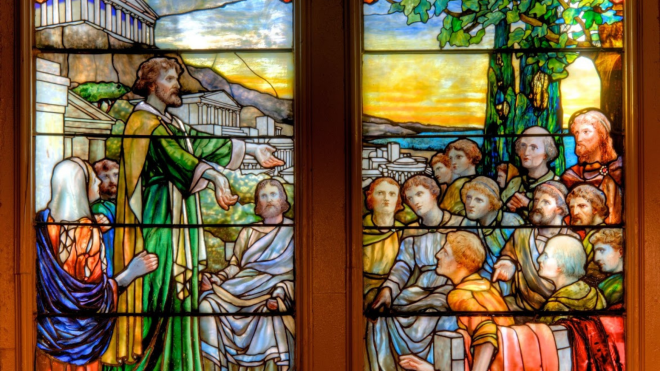 “People want to believe because of miracles, but it is the humanity of Jesus, his everyday life, which most clearly prolaims the message of Emmanuel, God with us. And so Jesus is amazed at their unbelief: because they expect to see God in the extraordinary, when God is actually most present to us in the ordinary – in the everyday stuff of our lives.”

May I speak in the name of God, who is to us Father, Son, and Holy Spirit. Amen.

Our Gospel passage for today is about Jesus preaching in his hometown. Jesus comes to the synagogue and begins teaching, and the crowd immediately latches onto his background saying, “Where did this man get all this? Is not this the carpenter?” They think of him as the son of Mary; the brother of James and Joses and Judas and Simon. They think of Jesus’ sisters, who live there in Jesus’ hometown among them. It’s an interesting story in the gospel, since we’re not used to thinking of Jesus’ family. In this case, Jesus’ very familiarity causes the crowd to doubt what he is saying. Jesus brushes the dust off his sandals, so to speak, and concludes, “Prophets are not without honor, except in their hometown, and among their own kin, and in their own house.”

I want to talk about this scripture passage today, and why it is significant that Jesus was rejected in the very place that he was raised. But first I want to take us on a bit of a detour. I want to take us to a different city, with a different preacher – about 20-30 years after the events of the Gospel. Let’s take a trip to Mars Hill in Athens, Greece with one of the most famous preachers of all time – the Apostle Paul.

The story that I’m about to tell is recorded in the Book of Acts, Chapter 17 – and the picture I’m about to paint doesn’t come from my own imagination, but rather from our own stained glass. If you look around our church building towards the back left side, to the right of the Columbarium, you will find a stained glass window installed in 1897, in loving memory of William Boardman and philanthropist Lucy Boardman. A picture of this window is also printed in your bulletin, if you’d like to take a look at it now. This luminous Tiffany window tells the story of the Apostle Paul, arriving Athens, Greece and his subsequent ministry there.

Imagine this: Paul has just arrived in Athens, after a long period of travel. As soon as he arrives, Paul is deeply distressed to see that the city was full of idols. He starts up a conversation about this with some local philosophers – a conversation which, I can only imagine, sounded a bit more like an argument. These philosophers become disgruntled, assessing Paul and saying “He seems to be a proclaimer of foreign divinities.” Exasperated, the locals take Paul to the Areopagus.

Paul stands up in front of the Areopagus – both the place, and the people – and he begins to speak. “Athenians, I see how extremely religious you are in every way,” he begins, “For as I went through the city and looked carefully at the objects of your worship, I found among them an altar with the inscription, ‘To an unknown god.’ What therefore you worship as unknown, this I proclaim to you. The God who made the world and everything in it, he who is Lord of heaven and earth, does not live in shrines made by human hands.” Paul continues to preach, basically saying that every altar in the city marked “to an unnamed God” is truly an altar to the God of Abraham, Isaac, and Jacob. The God of Jesus. The God of Christianity. It’s as if Paul is trying to lift up a veil from over their eyes and convince them that the God they have been worshipping all along is the very God that Paul proclaims.

In our stained glass version of this scene, we find ourselves in a very courtly setting. This is no rugged hill, but a beautifully landscaped courtyard with perfect Greek proportions and Greek temples rising in the city beyond. Through the cypress trees in the distance, the sky glows bright orange fading into blue, as if it’s the beginning of a very hot day (like some of the ones we’ve experienced this past week). It’s a symbolic dawn for the people of Athens.

As you look at the faces of those who are gathered, particularly those on the right hand side facing us, you can see the doubt in their eyes. Indeed, the passage in the Book of Acts says that some people began to scoff, putting the matter off for another day. And yet others listened to Paul. These people are named in the scripture – they are Dionysius the Areopagite and a woman named Damaris. Looking at the stained glass, I can guess who these people might be – and they are, surprisingly, the people with their backs turned away from us, as if their full attention is on Paul. We can see Damaris, the only woman, in the lower left hand corner – her hand reaching up. And I would guess that the man sitting in the chair in the lower right is another one of Paul’s converts, as he leans forward to listen. As viewers of this picture, we are closest to them both, part of an imaginary circle that extends around the Apostle Paul. The composition invites us to listen, too, to whatever it is that the apostle Paul has to say.

This scene is an interesting juxtaposition to our reading from the Gospel today. On the one hand we have Paul in a foreign city. On the other hand we have Jesus in a familiar city. In one story we have Paul speaking to a polytheistic community. In the other, we have Jesus speaking to other Jews in a synagogue, surrounded by the faith tradition that he himself grew up in. In many ways these stories seem like opposites. And yet there is one way in which I think they are very similar. Both Paul and Jesus are sharing the good news of God in Christ to a gathered group of people. And in both cases, the barrier to the crowd understanding is not the strangeness of the teaching but the aspect of familiarity.

In the story of Jesus teaching in the synagogue, the barrier of familiarity is clear. These people know Jesus already – not initially as a teacher, a prophet, or the messiah, but as a human being. They know him through his family. They know him through those thirty-some years of life before Jesus’ active ministry that we hear very little about in the Gospel narrative. When these people struggle to hear the message that Jesus brings, the scripture says that Jesus was “amazed at their unbelief.” We might understand this amazement as a variation of what many of us feel when we return to our hometowns, and the person that we have become is overlooked for the person that we were. But I think there’s something even more important going on here. Jesus is amazed at their unbelief – not just because those are the people he knew growing up, but perhaps because Jesus’ humanity is the very best possible testament to the Gospel. In other words, people want to believe because of miracles, but it is the humanity of Jesus, his everyday life, which most clearly prolaims the message of Emmanuel, God with us. And so Jesus is amazed at their unbelief: because they expect to see God in the extraordinary, when God is actually most present to us in the ordinary – in the everyday stuff of our lives.

Familiarity is also a stumbling block for the crowd in Athens, Greece. When Paul goes to the Areopagus to tell his story, the crowd thinks he is “a proclaimer of foreign divinities.” Ironically, it turns out that this is exactly who the crowd wants Paul to be. The Book of Acts describes the crowd in this way saying that, “all the Athenians and the foreigners living there would spend their time in nothing but telling or hearing something new.” And so the crowd gathers precisely because Paul is new, and strange, and interesting. They are in it for the spectacle. Of course, Paul lets them down when he gets up and begins by speaking about their own traditions, their own altars. Paul refuses to satisfy their craving for new things, and instead insists that the Gospel of Jesus Christ is already present among them, if only they have eyes to see it.

And yet our stories today, from the Gospel of Mark and the Book of Acts, have news for us. They tell us that the Good News isn’t new. The Good news isn’t new. Rather it is as old as creation, when the Spirit of God hovered over the waters. It is as familiar as a tune that you remember from your childhood, or a well-worn family heirloom. The Good News is woven into our lives from before we were born, and our acceptance of God’s grace doesn’t change the fact that it has surrounded us all along. The Good News isn’t new.

And what that means is that God is most present to us – not in miracles, or extraordinary events, but in ordinary things. Familiar things. Familiar people. Familiar routines. Ordinary things. The Jews in the synagogue and the council in Greece missed out on the message of God’s grace, freely given, because they were expecting it to come in some elaborate package. And yet the Good News was right there waiting for them all along, a brown paper package tied up in string, if only they had eyes to see it.

This week, I invite you to consider what Good News is waiting for you, that you might be missing because it is wrapped in the guise of ordinary, familiar things. Good is truly present in the ordinary. And we can make it part of our faith practice to look for God in ordinary, familiar things. This week, you might consider how God is moving through the life of a person who is close to you, a person you might take for granted. Or you might pick an object from your everyday life – a cup, a face mask, a set of keys – to hold and to pray with. Or perhaps take a moment to sit with any one of the beautiful stained glass windows in our sanctuary, and pray. You know we are blessed when you can say that Tiffany stained glass is something almost ordinary, that we might take for granted! And we are blessed. Pick a familiar window, pick a familiar object, pick a familiar person, and look for the presence of God in these things. God has been there all along, blessing us through ordinary, familiar things.

The Good News isn’t new. It is old as creation, as familiar as home. It is as close to us as the Spirit in which we live and move and have our being. The Good news isn’t new. But it is good. And we can choose to seek out that goodness in everyone, and in everything – opening our ears and eyes to the Gospel of familiar things – which is the Gospel of Jesus Christ. Slow down today and connect with God through the everyday stuff of your life – through the things you touch, and the people you meet.  Connect with God through ordinary things. Over time you will find that everything that surrounds you is like stained glass – because the light of God shines through it. Amen.